Whatever you do, you do at your own risk. I can only recommend and do not claim 100% of the solution much depends on your environment and other settings. I can not guess. Addition of materials and fixing bugs is welcomed

It came from where we did not expect, but from where it could come in principle. Begins a wave of denial of Google Chrome. The main sign of the problem is this picture: 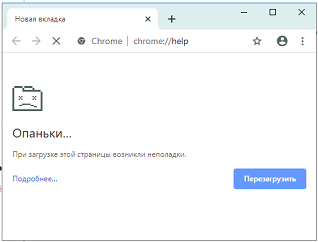 And the problem appears on all platforms...(decision next)

I suspect Google will think about it when the usage curve creeps down exponentially. Since it affects both Windows and Android. And so what can we do.

1) Delete Chrome or put a more recent version when it appears. maybe they will correct this mistake.

2) Download this link working version of Google Chrome 78.0.3904.108 or a previous version and install, but not yet happy.

3) On the way below, rename the folder, but I personally forbade access to it in principle:
C:\Program Files (x86)\Google\Updates\
Yes, I simply forbade access to it for the user, and also it is possible to make it and all subfolders read-only. I think this measure is more logical, because who knows whether Chrome can create a folder there or not.

Actually now we can enjoy surfing. So far only so.

But a colleague suggested the second method, for the current version, without reinstalling.

Add the following line to the Chrome launch shortcut

Add the key in the registry: to
the HKLM\Software\Policies\Google\Chrome branch
Parameter: RendererCodeIntegrityEnabled
Type: DWORD (32-bit)
Value: 0

If you helped the article or information was useful. Gratitude should not know borders